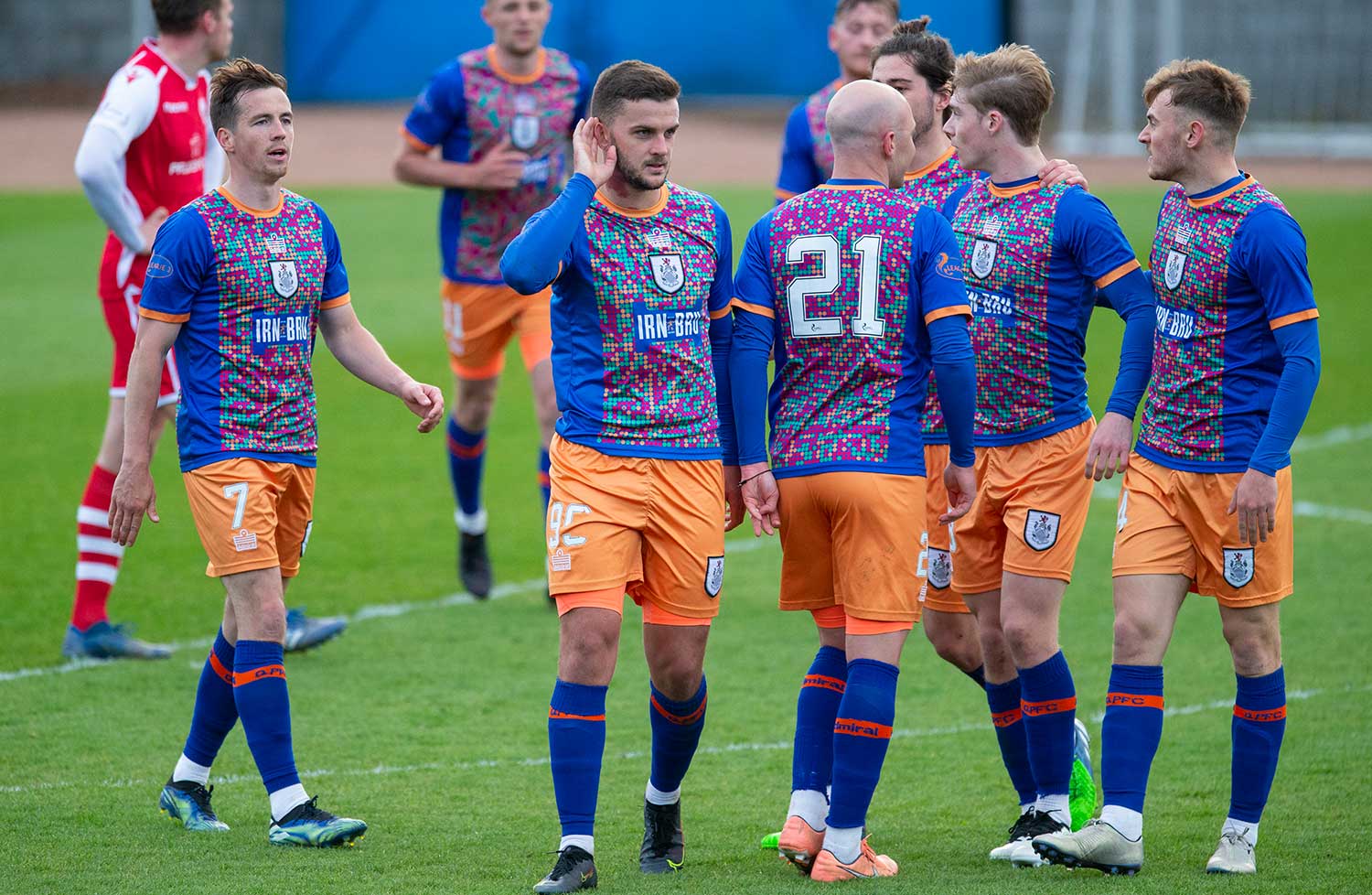 Reflecting the hectic schedule that every team is having to go through, and conscious, no doubt, of another game two days later, Queen’s Park made no fewer than six changes from the side that played Stranraer the previous week.  Hosts Stirling Albion, in the middle of a punishing four games in eight days, with the possibility of another four to come if they manage to shake off one of Edinburgh City, Stranraer or Elgin to finish in a play-off place, also made six changes.

Queen’s lined up in a 4-1-4-1 formation with Canice Carroll both protecting the defence and backing up the midfield four, with Salim Kouider-Aissa the lone front man.  With Davie Galt on the bench and Peter Grant out for the rest of the season, Willie Muir, now the man with most appearances in goal for Queen’s, had the honour of wearing the Spielfuhrer armband.

Albion had a fairly QP-esque look about them with Dominic Docherty, Kieran Moore and Kurtis Roberts in midfield.  They came hot off an excellent win at Edinburgh City on the Saturday, which gave them a big boost in terms of finishing in a play-off place.

Given the punishing schedule of late, I wasn’t expecting a classic and the first half bore that out.  I was told by that doyen of football writers, Gulliver, that the way to keep yourself active is to sharpen your pencils, and so I started on the first of my box of HBs.

To be fair, though, the game had a perky enough start with Gillespie and Longridge, the best performers recently, to the fore.  These two seem to cover some amount of ground in a game and, aided by the prompting of Luca Connell, they gave Albion a fright in the first minute with an excellent passing move across the face of goal that was eventually snuffed out.

Connell then shot wide before Albion gave us a wee scare when Roberts rounded Paterson and sent in a decent cross which the retreating Connell cleared.

Bikey, one of those exciting players who seem to light up a game in bursts, dispossessed Carroll in midfield, but Muir was out sharp to block him.  The ball wasn’t cleared, with it being bundled out for a corner.  That was 10 minutes in and plenty to scribble down.  But the game then took a bit of a lull and settled into a see-saw of action back and forth with nothing much to trouble either keeper.

Always watchable, though, is the tackling and generally physical play of Canice Carroll and he didn’t disappoint.  For an auld dinosaur like me, there’s nothing better than watching a beefy challenge and Carroll was finding one or two Albion players up for it.

Up front for Queen’s, Kouider-Aissa tried to make the most of what little of the ball he received and, for one guy, he can’t half be a handful.  He’s in and about the defence and must be a nightmare to play against.  He nodded a great ball to Longridge who was galloping down the wing but his cross was cleared.

Just before the 20-minute mark, a loose pass from Connell put Kilday in trouble, but once again Willie Muir was alert to it and came to clear.  As Albion picked up the pace a bit, Roberts fed Bikey, but Stuart Morrison came in with an excellent challenge.  Then Roberts put over an excellent free kick, but McGregor headed over when he should have done better.

Carroll was always in the thick of it and he loves a long, diagonal ball.  Both Longridge and MacLean benefitted, but we couldn’t make anything if it.  Gillespie was running the Queen’s midfield but, again, we weren’t making anything of his promptings. Longridge and MacLean switched wings, putting the latter on the right where he seems to be more comfortable and we looked a bit more dangerous.

The game seemed to be fizzling out towards half time and I was ankle-deep in pencil shavings when the game burst into life.  Roberts, easily the best man on the park for Albion, picked up a long ball from Byrne, but he was crowded out when in a very threatening position.  Five minutes before the break, and Longridge dispossessed Hamilton; Queen’s broke up the park and a great move involving MacLean, Doyle and Paterson was only broken up with a great tackle from McGeachie to block the latter’s cross.  Our best move of the game.

And then came one of those “How did he do that?” moments.  Longridge was fouled on the edge of the box in the centre of the goal, giving Connell and Kouider-Aissa the option of banging it with their left or right respectively.  I would have put my last penny on Connell taking it but, highlighting why I am indeed down to my last penny, it was Salim who took a few paces back and somehow bent the ball round the wall and squirming under keeper Currie.  It was a cracker and Queen’s went in one up, probably deservedly so.

At the start of the second half, we had a crunching tackle between Carroll and Docherty, the sort of thing you only see on old black and white videos of games in the 1960s, and the sound of which must have been heard back at Hampden.  It was the sort of tackle that yer Super Leaguers would have never recovered from, but Carroll was up straight away and Docherty eventually climbed to his feet, sore but with the admiration of the few in the ground.  It’s years since I’ve seen the likes and all perfectly fair.

The second half slowly ebbed towards Queen’s.  Doyle raced up and down the right flank, adding to Albion’s woes as they tried to contain our threat and Paterson was causing his own problems down the other wing.

Roberts kept the Albion pot boiling but the Queen’s defence, maybe not quite as steady as always, managed to stop his promptings from amounting to much. But it was Queen’s who had the upper hand, with Kouider-Aissa settling more into his role up front and receiving much more of the ball.  He has this way of jumping in the air and hanging there, flicking the ball of with uncanny accuracy, and Queen’s played to this with great effect.  65 minutes in and he leapt to a cross ball from Connell and headed down and past Currie who, again, looked like he could have done better.

Two up and Queen’s were very comfortable.  The subs started to come on and the freshness of McHugh and Galt, combined with the long, challenging balls from Connell and Carroll had Albion struggling.  McHugh came close twice, Galt was pinging over teasing crosses, and it looked all over.

Ain’t it always the way of it that this is when the opposition score.  With ten minutes to go, Hamilton, who made a big impact when he came on, fed Bikey and Morrison had to be quick to break it up.  Queen’s countered but the move broke down and it was Hamilton again who caused the problems, haring into the box and whilst Willie Muir was out to black him, the ball fell to Bikey who had an easy job to score.  Ten minutes to go.

Whether the legs were tired, Albion didn’t really capitalise on this lift.  Queen’s stayed firm with Gillespie calming it all down and surviving yet another meaty challenge from Docherty but ending up with a booking himself, which didn’t seem like justice.  Gillespie was then outstanding when blocking a shock from Wilson, throwing himself at the ball, and whilst Albion had a couple of decent attacks near the death, it was another win for your Champions.

This was one of those mid-season grind-it-out wins that we have seen often this year and a deserved victory.  Good to see the youngsters Gillies and Biggar get a few minutes on the park, but it was old lags Gillespie, Longridge and the excellent Doyle who impressed in particular.  But then you could run right through the team and highlight excellent performances by everyone.  No outright stars on the night; an all-round solid performance and three more points on the board.  Job done.

Finally, it was a nice touch by Willie Muir who gave up the captain’s armband when Davie Galt came on.  The wee touches like that mark this club out as special.