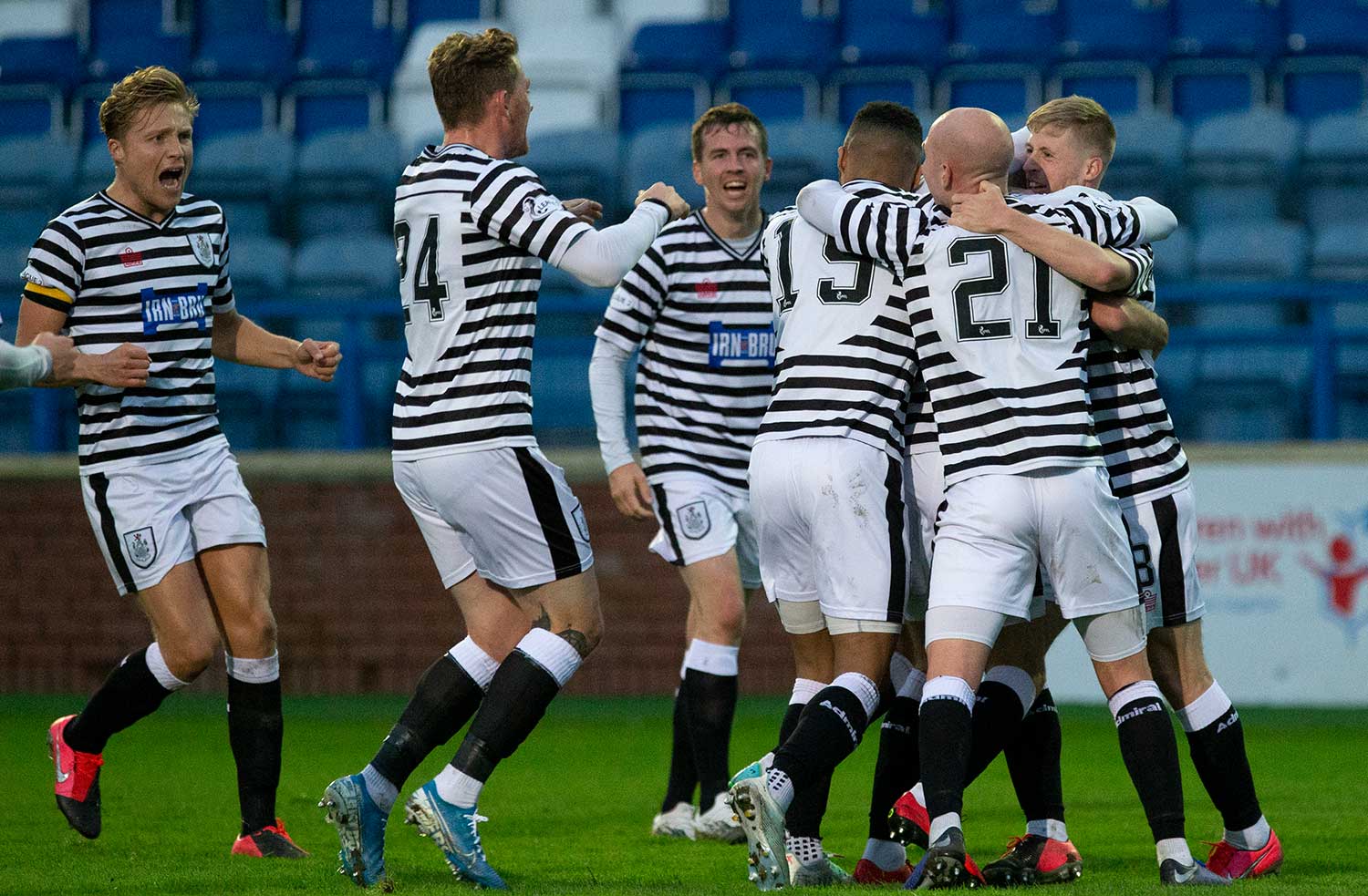 Queen’s Park travelled down the A77 to Stair Park as Storm Aiden swept across the country. The Spiders were also seeking to preserve their unbreached defensive league record against a Stranraer side who experienced demotion last season.

The sides last met in what could only be described as a truly bonkers game of football at Stair Park back in March 2018. In a season culminated with relegation from League One, it was a rare afternoon of elation for the travelling Queen’s support. Former Spiders – but now all Stranraer players – Adam Cummins and Sean Burns were in the Queen’s starting line-up, with Thomas Orr an unused substitute that afternoon.

Aidan Keena – on loan from Heart of Midlothian at the time – banged Queen’s into a dominant two-nil lead, and as we appeared to be coasting to victory, our fragile defence had other ideas. Stranraer grabbed a goal back through Scott Robertson, but Burns soon restored the two-goal advantage with what turned out to be his last goal for the club. The referee awarded Queen’s a penalty with only two minutes remaining, the exuberant travelling band of supporters rejoiced in both joy and relief, but Keena missed the spot-kick. Moments later, the referee then awarded Stranraer a penalty, which was duly converted by Scott Agnew. The fans nerves had gone to pot, but in the end, the Spiders clung on for a slender 3-2 victory.

A similar result would suit Ray McKinnon, as the manager made only one change to the starting line-up that defeated Albion Rovers last weekend with Darren Lyon replaced by Craig Slater, who had now returned to full fitness. The head coach also welcomed new signing Michael McGlinchey into the squad and was named on the bench; the experienced New Zealand international midfielder had joined the club during the week.

Following on from his fifth straight league shutout Willie Muir continued in goals with the same back four of Michael Doyle, Lee Kilday (who had recovered from last week’s arm injury which forced him off at half-time), Peter Grant and Tommy Robson. Slater slotted into central midfield to partner Grant Gillespie with captain David Galt on the left and Louis Longridge on the right side of a midfield four. Last week’s goal hero Will Baynham continued upfront alongside Bob McHugh.

Lyon and McGlinchey were joined on the bench by Stuart Morrison, Ross MacLean, Brody Paterson, Jai Quitongo and Cammy Bell.

Despite dropping to League Two level, the Blues side possessed several familiar threats. Forward Orr led the line after earning a move to Stranraer following an impressive couple seasons with Lowland League side BSC Glasgow. Whilst former Queen’s Park captain Burns – who amassed over two-hundred appearances in his time at Hampden – recently signed up in the summer and started at left-back. Furthermore, Liverpudlian defender Cummins – who always posed a danger from set-pieces netting thirteen times in his two seasons under Gus MacPherson – was named on the Stranraer bench.

However, a number of players were unavailable through injury for Stevie Farrell’s depleted Stranraer side, and key midfielder Grant Gallagher was also serving a suspension. The long-serving midfielder received a red card last week against Annan Athletic for a challenge on former Spider Jack Purdue which resulted in a serious leg break for the skilful winger. Best wishes to Purdue, who always came across as a jovial character during his time at Hampden last season.

Both teams entered the field of play from opposite stands. There was a slight delay to kick-off as one of the goal nets required a bit of repair work. Eventually, referee Duncan Williams blew his whistle to begin the contest, and Kilday’s first ball forward was captured by the gale-force winds and flew out the park for a goal-kick. An early indication of the challenging conditions to be contended with throughout the match.

With only three minutes played, Galt’s drop of the shoulder and neat turn allowed him to escape the defensive attention of both Ruari Paton and the experienced Jamie Hamill. His cutback then rolled tantalisingly across the penalty area and eventually found its way to the feet of Longridge.

Less than a minute later and Gillespie shuffled past a couple of men in midfield and played a pass into Galt. The captain then nutmegged Hamill with his first touch and charged towards goal, but centre-back Tom Devitt blocked his left-foot effort for a corner.

With the wind behind them, the Spiders fast-paced start continued. McHugh looked to latch onto Slater’s low corner-kick. Despite the ball being slightly behind him, the striker adjusted his body well to get his attempt on target, but Greg Fleming in the Blues goal gathered the ball with relative ease.

Queen’s impressive start soon petered out as Stranraer got to grips with the windy conditions. With half-time approaching, it was the Blues with the best chance of the game. Orr chased down a hopeful ball forward and pressed Kilday into an error – his header back to Muir was too short! The frontman pounced on the opportunity and looked to place his shot, but Muir sharply dived low to his left to make the save as Queen’s went into the half-time interval scoreless for the sixth away game in succession.

Two minutes into the second half and the determined Orr continued where he left off. He stole the ball off Gillespie in the middle of the park and raced towards the Queen’s defence. At twenty-five yards out from goal he drilled a left-foot strike straight at Muir, but the ‘keeper managed to gather at the second attempt.

Stranraer were using the wind to their advantage as they took the game to Queen’s. The Spiders defence failed to clear their lines, and the ball popped up favourably for Paton on the edge of the area. His volley was sweetly hit, but it was straight down the throat of Muir.

It was not until the hour mark when Queen’s next ventured forward with purpose. McHugh played the ball out to Galt, who then fainted inside and intelligently played in the overlapping Slater. The creative midfielder seemed to take too many touches when bearing down on goal, but he managed to toe-poke an effort at goal which was smartly saved by Fleming.

Queen’s were now adjusting to playing into the wind as Galt and Slater again combined, but on this occasion, Galt’s teasing cross evaded Longridge at the back post.

With seventy-three minutes on the clock, head coach MacKinnon made a double change in search of the opening goal of the game. Galt passed the captain’s armband to Grant as he departed for MacLean – affectionately known as Chucky amongst his teammates (in reference to the fictional horror film character). The other sub saw Quitongo come on for McHugh. The changes meant the versatile Longridge shifted from right to left, and the manager deployed MacLean in his favoured right-wing position.

Shortly after and Gillespie’s blocked effort broke to Longridge outside the box. He shifted the ball out from under his feet, but Fleming comfortably held his strike at goal. Queen’s were now in the ascendency as the Blues were seemingly settling for a point.

With only seven minutes left to play Slater fed the ball out wide to MacLean. The pacy winger burst past his man and whipped a dangerous ball across the face of the ball. Devitt did superbly well to scoop the ball clear from under his crossbar.

However, the Spiders quickly picked up the loose ball and Robson played it back infield to Slater around thirty yards from goal. His ambitious long-range effort swirled, dipped and bounced in front of Fleming, and the ‘keeper could only parry the ball out to MacLean. The substitute’s first touch took him past one defender, and he showed great composure to dance past another onrushing defender to set up a golden opportunity for himself. MacLean then smashed the ball into the net to spark elation amongst the Queen’s players and coaching staff. If only the fans could have been there to share in the exuberant celebrations – there are fewer more rewarding moments for a loyal supporter than a game-defining late goal on the long away day.

Into the final minute and Stranraer threw on Scouser Cummins upfront. MacKinnon reacted quickly and countered that change by introducing Morrison as an additional centre-back with the attack-minded Longridge departing, as the Blues went in search of a late equaliser.

There was still time for a final chance for Queen’s as Baynham picked up the ball following a mix-up in the Stranraer defence. Although, the big striker delayed his shot which allowed Devitt time to close him down and block his eventual attempt at goal. Soon after referee Williams blew his whistle for full-time and Queen’s had gained a hard-fought three points.

With results in other games going in our favour Queen’s jumped to the top of the table. A delighted MacKinnon praised the attitude of the players to grind out a win in difficult conditions. He was also pleasantly surprised by the energy shown and instrumental performance from Slater on his first start of the season. Next up for the Spiders is a long trek up north to face Elgin City in our fifth away game from our opening six fixtures.