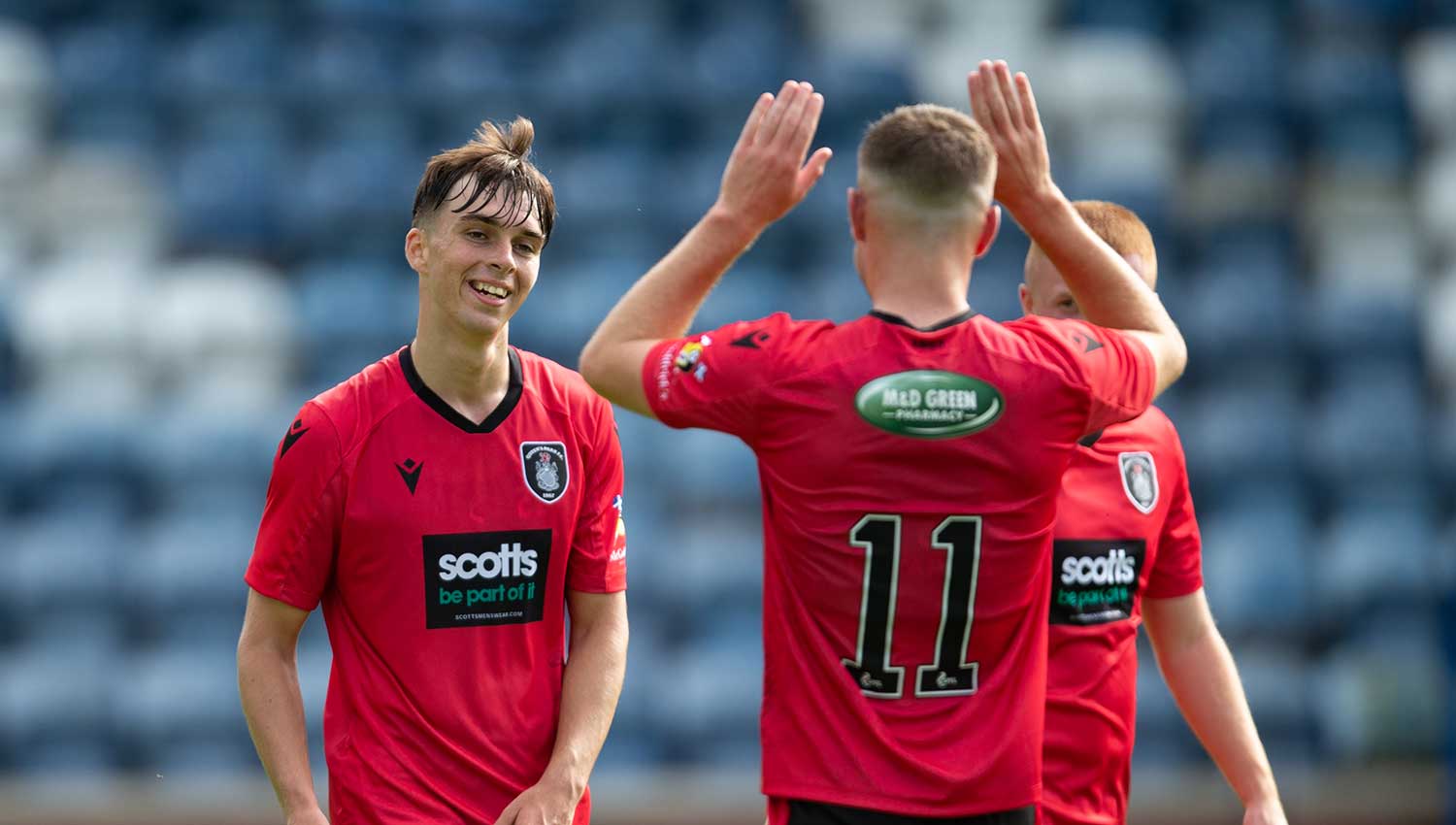 Queen’s Park, resplendent in their new Scotts Menswear sponsored red and black away tops, were still full of fizz on their 155th Birthday as they saw off Stranraer 5-2 at Stair Park, with Simon Murray grabbing a hat-trick and Grant Savoury finding the net twice.

The visitors started brightly and Murray volleyed for goal from 20 yards however the ball flew high over. A minute later Savoury wriggled free and it took a well-timed tackle from Kyle Girvan to stop Jarrett netting early into his Queen’s career and on five minutes Thomas cut in with his low drive from the edge of the box brought out a fine stop from Luke Scullion.

On eight minutes Calum Ferrie shone as he dived and clutched a low James Hilton effort from 16 yards.

A goal arrived on 9 minutes when a mistake in the home defence allowed Tommy Robson’s pass to run through to MURRAY who side-footed home despite Scullion’s best efforts.

It was 2-0 on 28 minutes when Thomas floated over a corner and MURRAY headed home from inside the six-yard box.

Savoury should have added a third 60 seconds later when he headed wide with the striker misfiring again shortly afterwards after Murray had released him.

Luck deserted Savoury again on 33 minutes when he sent a header crashing towards goal only for Scullion to produce a fine stop.

It had to happen for SAVOURY and it did on 42 minutes when he picked up a Thomas pass and spun before sending a shot out of Scullion’s reach with the aid of a deflection.

Stranraer pulled a goal back within a minute when Hilton crossed and Scott ROBERTSON stuck out a foot to net from six yards.

Bizarrely it was 4-2 at half-time with Stranraer notching their second after Jarrett had fouled Hilton and despite the Stranraer man seeing his penalty saved by Ferrie, McLean slammed home the rebound.

Queen’s raced to the other end and MURRAY completed his hat-trick when he swivelled and sent a low drive into the corner.

Four minutes into the restart Murray and Savoury combined during a lightning break and teed up Louis Longridge however his shot rose and cleared Scullion’s bar.

The second half saw further chances with Ferrie pushing away a Hilton free-kick and visiting substitute Lewis Moore was denied a quick-fire goal by the legs of Scullion with Ferrie judged to have caught a swirling McLean cross before it crossed the line.

The game saw one more goal and it came from SAVOURY in injury time when he worked his way to Stranraer’s 18-yard line and sent a shot flashing past Scullion.